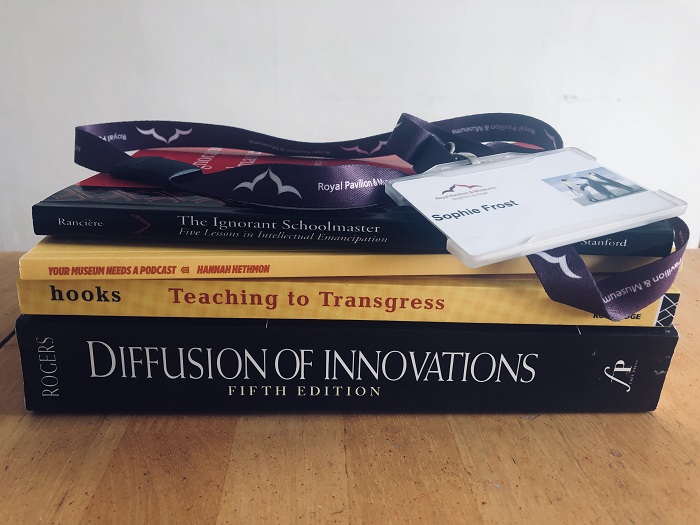 For some time now, I have been thinking about the relationship between employee agency and the making of progressive and risk-taking activities and exhibitions across the arts and heritage sector. As a Digital Fellow on the One by One project exploring digital literacy in museums, I am working with Royal Pavilion and Museums Brighton and Hove (RPM) to uncover responses to the question: how might we develop digital confidence in the museum workforce and use technology to empower greater personal storytelling around its buildings and collection?

One answer has been to orchestrate a staff-led podcast series.

This intends to be a platform for employee self-expression, aiming to encourage creativity through personal storytelling. It will position RPM’s five sites as intrinsic to the staff themselves – as part of their identity and shared history as citizens within the community of Brighton and Hove. The podcast series will be a polyvocal exercise, comprised of the multiplicity of voices which make up RPM.

In this blog post, I am going to sketch out some of the intellectual underpinnings of my claim for the sector: that by applying certain theoretical approaches – notably diffusion theory, radical pedagogy and creative agency – to our delivery of digital training for the museum workforce, we can create the kinds of museums that truly speak to the complexity of 21st century society.

In 1962, Everett M. Rogers described the ‘diffusion of innovation’ (in other words, the spread of new ideas) as a gradual and social process whereby “subjectively perceived information…is communicated from person to person” (2003: xx). According to Rogers, the meaning attached to a new idea is “worked out through a process of social construction” (2003: xxi). Technology as a socially constructed process is fundamental to the critical framework I present here.

At RPM, as with many other UK museums, there is trepidation amongst some employees with regards to digital technology – most pertinently in the realm of social media. Fears range from its potential threat to privacy, concerns over its ethics, issues of employee self-promotion versus organisational marketing, and the extent to which it accurately captures institutional voice (indeed, in many instances social media has destablised previously infallible organisational identities).

For Rogers, a key aspect of the diffusion process is the capability of those who choose to implement an innovation to, at the same time, re-invent it (2003: 17). Yes, reinvention has been commonplace in the arts and heritage sector for decades; in light of funding cuts it has become crucial to our survival. However, if we extend the concept of reinvention to the way we approach digital literacy in the museum workforce, skills development need not feel didactic or sermonising, but like a gradual negotiation leading to a staff consensus on what feels right.

In this new way of thinking, digital skills development is a provocative action, an equalising and decentralised practice, where museum people choose the applications and technologies that best fit their specific context (size, location, collection, audience, etc.) acquiring, in the same breath, the right to reinvent them.

This perspective is shot through with ideas drawn from French philosopher Jacques Rancière, who in his book The Ignorant Schoolmaster describes how in 1818 Joseph Jacotot, an exiled French schoolteacher, discovered an unconventional teaching method built on the premise that all people were equally intelligent. Of the ignorant schoolmaster Rancière states:

…he does not teach his pupils his knowledge but orders them to venture into the forest of things and signs, to say what they have seen and what they think of what they have seen, to verify it and have it verified. What is unknown to him is the inequality of intelligence.

It is precisely this spirit of exploration, of venturing into the forest of the unknown, of having the right to challenge, re-invent and appropriate one’s digital tools, that we should promote within and alongside the manifold training initiatives, one-off workshops and online resources already out there to help build digital maturity in museums.

By inspiring digital courage in all staff members (regardless of rank), we can present our cultural organisations as sites of participatory democracy in their own right. Sites in which, to paraphrase Rogers, the collectively-reached decisions of staff members on whether or not to implement new technologies signify a consensus vote (2003: 67). Thus, we engender museums as spaces of egalitarian possibility, horizontally constructed models of radical pedagogy and creative agency for the wider communities which they serve.

With this exploratory spirit in mind, we begin recording the RPM staff-led podcast series next month. Helpfully, Rancière describes the act of storytelling as a pedagogical process of recounting: “one of the concrete acts or practices that verifies equality … just as the act of explication posits inequality” (1991: xxii).

My hope is that this podcast series will empower staff to re-negotiate the perimeters of their digital courage (both self- and institutionally-imposed). In doing so, perhaps employee storytelling can become an integral element within a consensus-based model for building digital literacy in the cultural sector.