It has long been a professional ambition of mine to attend the Association of Independent Museums (AIM) conference. At this year’s conference on Thursday 20th June at the Civil War Centre in Newark, Ross Parry and I shared mid-project insights and findings from One by One in a talk entitled ‘Building Digital Confidence in Museums.’ 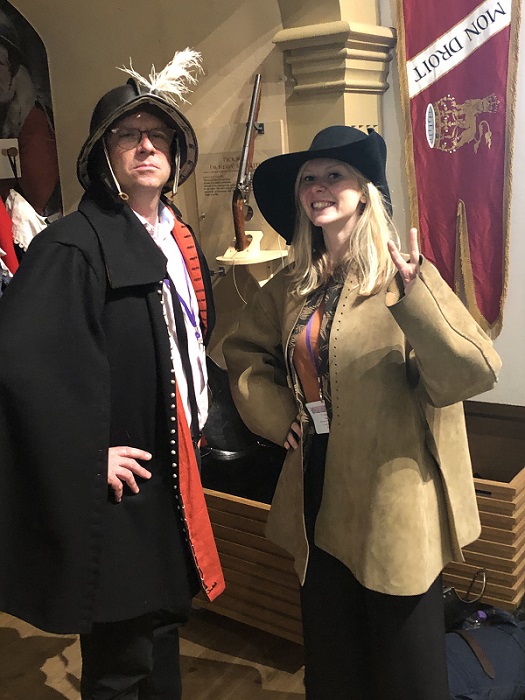 Professor Ross Parry and Dr Sophie Frost get into the historical spirit, trying on costumes at the National Civil War Centre

The overarching theme of this year’s conference was ‘How to be a great destination,’ placing emphasis on the role of placemaking, destination building and visitor experience for 21st century museums. I was struck by the fact that so many of the presentations were by museums who prioritised the agency and confidence of their workforce, whether volunteers or contracted staff.

Particularly inspiring was the opening keynote with Iain Standen (CEO) and Hilary McGowan (Trustee) from Bletchley Park Trust, who provided a behind-the-scenes take on how the organisation has been transformed since being awarded a £5 million National Heritage Lottery Fund (NHLF) grant in 2011. The successful regeneration of the site which was previously, according to McGowan, an “eccentric collection of decaying buildings,” has been possible by developing a comprehensive six-point approach that included: a compelling narrative, a strong sense of vision, clear strategy and plans, a visitor focused offer, well supported people (both staff and volunteers) and a certain degree of luck.

From the perspective of the One by One project, the realisation of ambitious museum initiatives such as Bletchley Park’s can be ensured by investing in and building a digitally confident museum workforce.

Ross kicked off our afternoon session by providing an overview of One by One’s work to date, highlighting the role of design thinking in creating a project that responds to the existing shortfall of digital literacy in the museum sector, as pinpointed in policy documents such as Culture is Digital (DCMS 2018) and Enriching Britain: Culture, Creativity and Growth (Warwick Commission 2016).

I followed suit by providing some insights from my work as Digital Fellow at Royal Pavilion and Museums Brighton and Hove (RPM), one of our museum partners, and how I have established responses to the question: how might we develop digital confidence in the museum workforce and empower greater personal storytelling around its collection using technology? You can find an initial summary of these insights in my previous blog post here.

It was brilliant to see so many of our project partners in the room taking part in the conversation, including the Museums Association, Arts Council England, AIM and NHLF. This summer is a pivotal point in One by One as our research interventions draw to a close and we will be coming together with our partners to understand what the insights have been and what we are going to share that is of value to building digital literacy across the sector.

What is always a delight is that these professional occasions typically take place in a museum, giving us an opportunity to remind ourselves of why we are undertaking such research in the first place. In exploring the Civil War Centre after our presentation we saw the best of what a museum can be, particularly the way that different media was woven effectively into the story of the Civil War in order to capture the relationship between parliamentary authority, representations of power and the future of a united kingdom.

At one point we walked past a portrait of Oliver Cromwell painted in 1649 following his victory over Charles I in the civil war. Cromwell is dressed in the chivalric garb of the former monarch, mirroring his predecessor’s iconography of power whilst triumphant in his newfound supremacy. This sighting led to us having a half hour conversation about the tribulations of Charles I as he sought to maintain his rule throughout the conflicts and politics of the Civil War. It’s a stirring and rich story from a mere four centuries ago, with lessons that are relevant to the troubling political conflicts that we still face now, especially in terms of the trustworthiness of authority and the role of Europe in our self-understanding.

More than ever, as museum professionals, we need skills which can enable us to keep telling these important stories.